I had this idea to do a tarot card of the hanged man with a polaroid shot - this is the result with my newish ee55 camera: 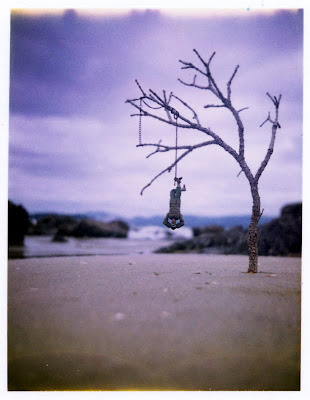 Odin hung himself for 9 days on the world tree to gain secret knowledge - don't know if this little action figure got any wiser though! Shot at Tawharanui with an EE55 and 125i film. 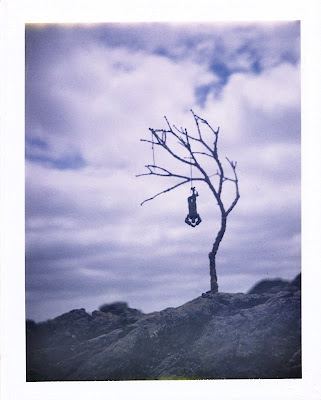 I tested out my EE55 Camera today, absolutely loved it. Its a fixed body camera, unlike my EE100 Special - no light leaks. It performed wonderfully today. Here is the first shot I took, at Tawharanui Park near Matakana: 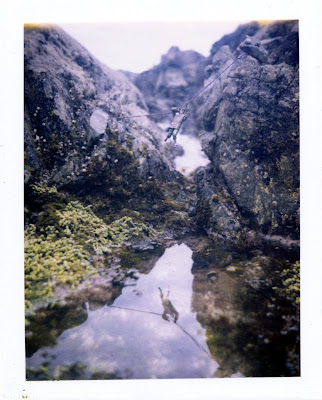 The edge was giving away... 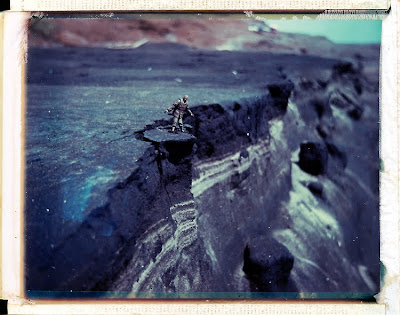 This camera has heaps of reviews - so I won't go into to much detail about, and just talk about a hack that I use. If you are new to polaroid, want to know more about what kind camera to choose - go visit this post on the mocking-bird blog. Or here. Or just about anywhere on the site.
I am primarily a pack type of guy, so I don't use this camera very much as it uses integral film (the type of film most folks associate with polaroid film). Generally quality of the film that goes in this camera absolute shiite, but thats why you should love it. Seriously. Polaroid Integral have their own look and feel to it. They are kinda like bulldogs of analogue world - these beasts are ugly and cute at the same time. And chicks really dig them.
Now, this here one step is good camera. Its actually the first polaroid camera I bought. Its the only integral film Polaroid Camera I use. Here's a pic of this bad boy. 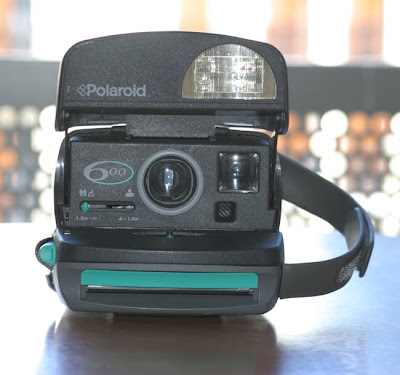 Here are some notes on using this camera: 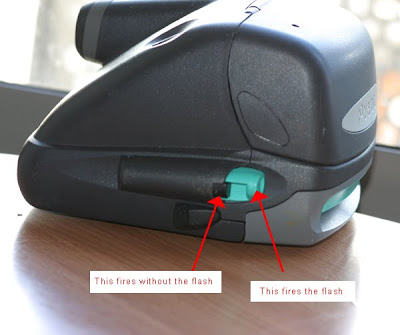 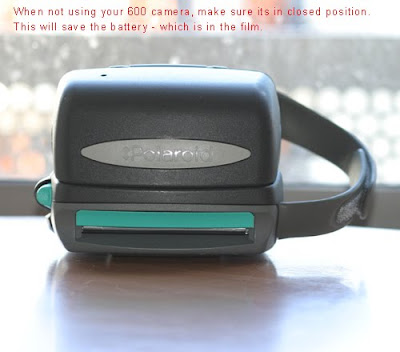 Ok - don't have any custom built filters for this camera, however being the kinda of guy with more practical sense than with any style - here is how I use a polarising filter with the camera that obviously doesn't fit the lens. You will need the items below: 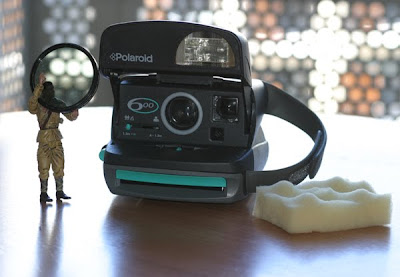 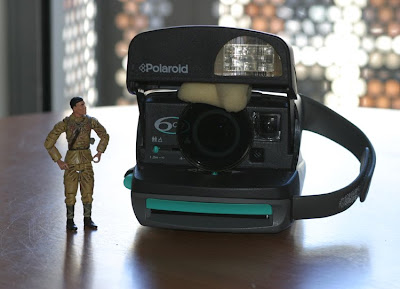 Yep, I know its not pretty, but you can get some great results using a polarising filter: 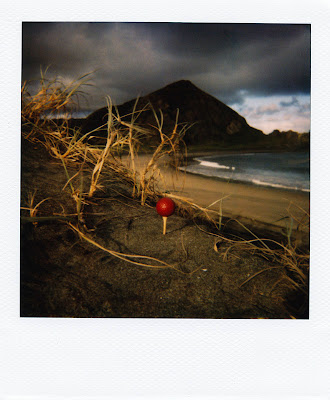 However, if you fail to push all the foam back, it will show on the film. You'll have to look at the front of the camera to make sure its not bulging out as it does in this: 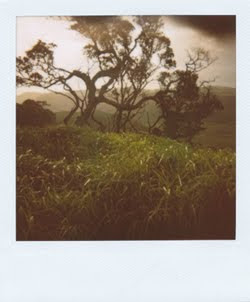 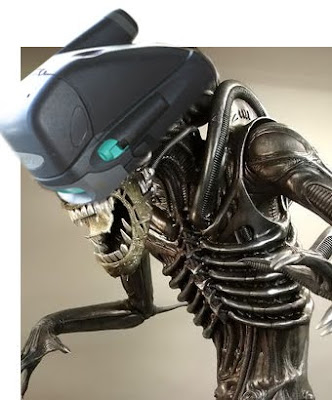 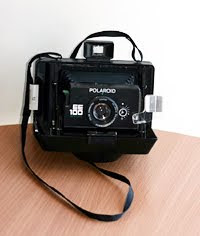 Ah the EE100 Special, yes it indeed is special. Like most polaroid cameras available on online auctions, owners have long abandoned these jewels in favour of snappy little digital cameras. I was able to pic this one up on the cheap.
The first thing you will on the EE100 Special has very sketchy details.? Hey I even found it here as listed as a digital camera!
First of all, EE100 Special is a Packfilm Camera, and you can still buy film for this (get yourself some expired Polaroid Packfilm (type 100) or FP-100c film. You will notice there are some funky features, most notably, the square plastic lever on the side. What is this thing? 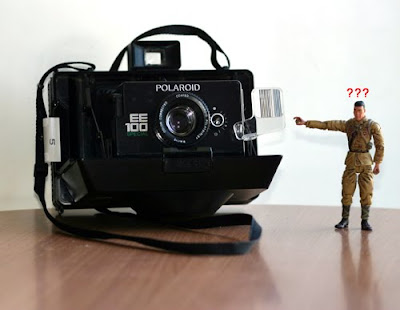 I posed the question on a flickr polaroid forum, in which user Becky replied:

That is the flash cube diffuser which probly can be taken off...cough...ripped...as it basically doesn't do much. But some more than likely swear by it. I never found use for it. You can also find that thing on several other Polaroid models.

So if you flash cubes (in which this camera doesn't) it would basic take off some overexposure caused by flash. My diffuser remains a vestigial limb on on my camera.
Another feature is that it allows 3000 ASA film or 75 ASA (you can use 75 setting for most of your polaroid/fuji films). The 3000 setting is primarily for black and white films, and said to be useful for low lighting. I haven't used it, but its nice to know its there (circled in red below): 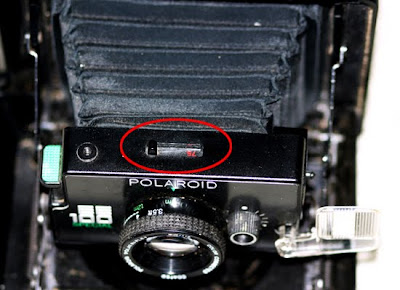 Ok the biggest complaint on the internets about this camera are light leaks. Like all older Polaroid cameras with bellows, your gonna get light leaks, these are commonly caused but tiny holes in the bellows themselves. Here is an example photo with light leaks: 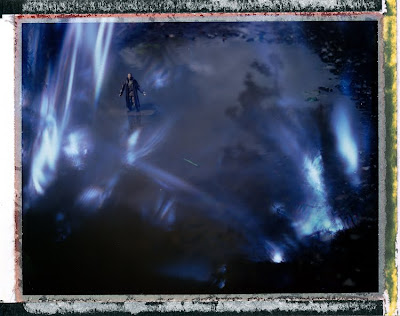 Generally, the bright the light outside, the stronger the light leaks. However, don't be dismayed and buy a digital camera just yet, or moan on the Flickr forum about horrible this camera is!You can fix the light leaks to large degree, and quite cheaply. And you don't have to go into a very dark cave and shining a torch inside the bellows to find the microscopic holes.
Now, this ain't pretty solution, its working solution. What you need is a back T-Shirt, so find that old black AC/DC T-shirt (the one numerous stains of unknown origins) and rip off the sleeves: 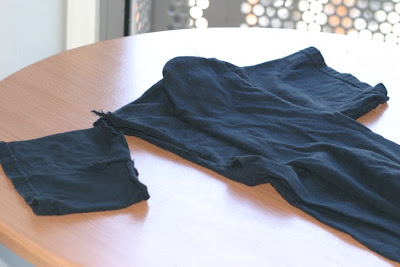 After doing this, wrap the black sleeve over the bellows like this: 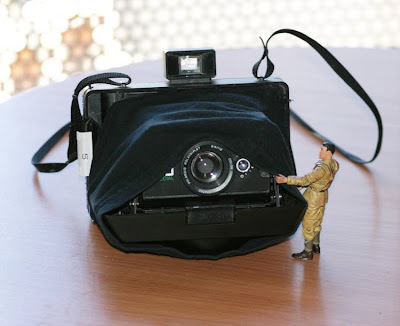 Try cover as much of the bellows as possible. The added bonus is that you also have sleeve-less black t-shirt, so you can now show off your biceps from lifting crates of expired Polaroid film you bought from Ebay (you have been hoarding film, haven't you?). Now the camera ain't gonna win any beauty contests, however - some of your pictures might!
This should eliminate most light leaks (some occasionally sneak through) but you can wrap the bellows with another black sleeve.
This EE100 Special has become my favourite packfilm camera, I use it all the time. In short I love it, I reckon it takes splendid photos and is super durable.
Some notes:
Now get out there and shoot some film!
at 2:15 PM 8 comments:

My Polaroid Cameras (Collection so far...)

These are my polaroid cameras to date, I'll do a basic review on them a bit later, click to enlarge: