Here is another diagram for taking Polaroids, from Popular Mechanics:
Here are some of trouble shooting topics: 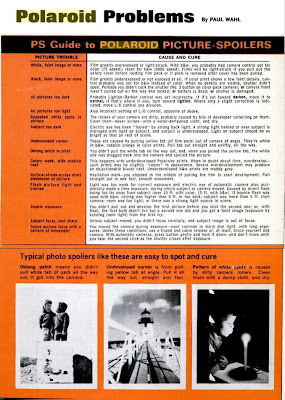 How to load polaroid integral film into One Step Cameras

As previous video - here's how you load polaroid integral film into One Step Type camera - pretty self explantory - however if the paper flip doesn't come out, the battery within the film maybe dead. Enjoy!:

How to load polaroid pack film in a land camera

For those wondering, here is how you load pack film in old Polaroid Land Camera - the example here is a 340 Land Camera, but it should be similar enough for all land camera types.

Earlier I did a post about types of Polaroid and instant film - but lo and behold I've found the ultimate list here on Save Polaroid - check out the site for details - but here is a list of Polaroid and Fuji Instant films from the site.
Quick run down of Film Types for those new to polaroid in non technical terms:
Integral Film- The type of film that develops before your eyes - its ejected by the camera and takes a few minutes to develop.
Pack Film - This is 'peel apart film'. Pack film is more manual than integral, you take a picture then pull it out of the camera. You then wait for a period time (usually base on what the temperature is) and then peel apart the layers - one side has the negative and the other side has the print.
Sheet Film - Very similar to Pack Film in the process - you have to peel it apart, however, sheet film comes in individual negatives as opposed to rolls or packs. The film sizes are for 4x5 and 8x10 cameras.
Asterisks are for the type of film - and my notes
Polaroid Instant Film:
Fuji Instant Film:
From the ones I've used - I can't really pick a favourite. Integral - I prefer the instax for the colours, although I've had some superb results from 779 polaroid films. For pack film, I prefer Fuji fp 100c (silk not glossy) for colour, however - i really dig the purply hues of UV ID films.
Try them for yourself! But beware with expired film, you may get some unfortunate experiences. So results may vary, but the joy of taking instant film shots overweighs the pain!
at 11:40 AM No comments: